5 Tips for Better Relationships With Your Students – NEA

The Teacher as Warm Demander by Elizabeth Bondy and Dorene D. Ross

The Power of Positive Regard by Jeffrey Benson 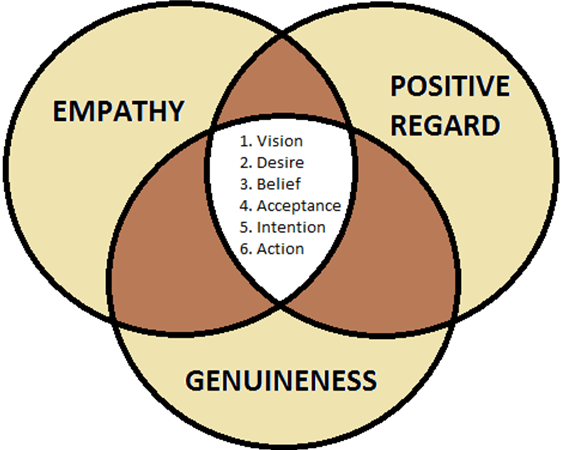 Carl Rogers described unconditional positive regard (UPR) as love and acceptance that are not dependent upon any particular behaviors. He often used the term “prizing” as shorthand for this feature of a relationship. According to Rogers, prizing is particularly important in the parent-child relationship.

Carl Rogers described unconditional positive regard (UPR) as love and acceptance that are not dependent upon any particular behaviors. He often used the term “prizing” as shorthand for this feature of a relationship. According to Rogers, prizing is particularly important in the parent-child relationship. Rogers argued that children who are prized by their parents experience a greater sense of congruence, have a better chance to self-actualize, and have are more likely to become fully functioning people than those whose parents raise them under “conditions of worth.”

Unconditional positive regard is also a crucial component of Rogers’ approach to psychotherapy. In fact, along with empathy and genuineness, Rogers asserted that UPR was one of the necessary and sufficient elements for positive psychotherapeutic change. When Rogers described UPR as “necessary,” he communicated that an unconditionally accepting and warm relationship between therapist and client is a prerequisite for therapy to be effective. This assertion is not particularly shocking; most individuals seeing a therapist would probably expect the therapist to have this type of nonjudgmental attitude, and would also probably expect therapy to progress poorly if the therapist was in fact judgmental or conditionally disapproving. When Rogers described UPR as “sufficient,” however, he made a bolder statement. The term “sufficient” suggests that if a therapist provides UPR, along with empathy and genuineness, to a client, the client will improve. No additional techniques or strategies are needed. The therapist need not analyze any dreams, change any thought patterns, punish or reward any behaviors, or offer any interpretations. Instead, in the context of this humanistic therapy relationship, the client will heal himself or herself by growing in a self-actualizing direction, thereby achieving greater congruence. This “necessary and sufficient” claim holds true, according to Rogers, regardless of the diagnosis or severity of the client’s problem.

In addition to the parent-child and therapist-client relationship, Rogers also considered the value of UPR in other relationships and situations. For example, he spent significant time and energy discussing the role that UPR might play in education, and in the teacher-student relationship in particular. Rogers criticized the mainstream American educational system as overly conditional. He believed that educators too often used the threat of poor grades to motivate students, and that students felt prized only when they performed up to educators’ standards (as measured by grades on exams, papers, etc.). He further believed that students may emerge from school having learned some essential academic skills, but also having learned that they are not trustworthy, that they lack internal motivation toward learning, and that only the aspects of themselves that meet particular academic criteria are worthy.

Rogers strongly recommended that teachers and administrators take a more humanistic and less conditional approach to education. He argued that UPR in schools would communicate to children that they are worthy no matter what; as a result, their sense of congruence and their tendency toward self-actualization would remain intact. Students, according to Rogers, should be trusted to a greater extent to follow their own interests and set to their own academic goals. Rather than threatening students to study for exams and write papers in which they have little interest, prize them wholly and allow them greater freedom to choose that which they want to pursue. Advocates of Rogers’ humanistic approach to education argue that it would enhance students’ self-worth, which in turn may preclude many of the psychological and social problems that children encounter. Critics of Rogers’ humanistic approach to education argue that without conditions of worth based on academic achievement, students would have no provocation to learn, and would demonstrate lethargy rather than self-motivation. 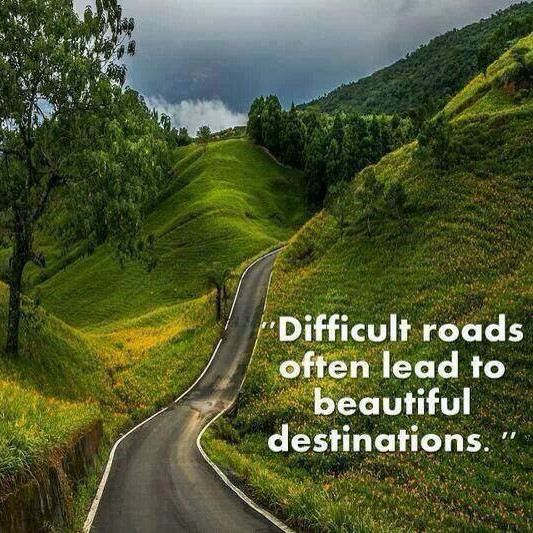 I feel that now more then ever a balance needs to be set for students in building their own sense of well being in times of adversity. Many students are aware of their deficits and often times lose sight of the greater goals of retaining a balanced view of themselves over the perceived expectations and judgments teachers and parents may project on to their young learners. As a parent and educator, I am guilty of this as well. In an effort to bring more positivity to those I encounter, I wrote this post to help myself and others better cultivate positive mindset ideas and practices. In some circles, they say to start with a “beginners mind”. I take this as staying curious and not judging ones own learning curve taking knowledge as it comes and being gentle with yourself throughout the learning process.

When creating positive affirmations,
keep in mind that they should be:

Adapted from Works by Che Garman

Learning is different and we have to look at building flexibility because of the new way we present information and teach concepts in school. Look at the chart below that helps to illustrate old school versus 21st-century learning. 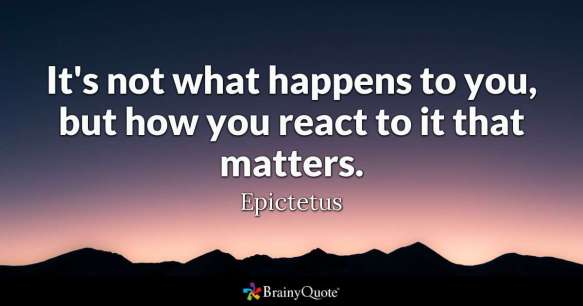 Research of Positive Self Talk

 Stop, and breathe, I can do this
 This will pass
 I can be anxious/angry/sad and still deal with this
 I have done this before, and I can do it again
 This feels bad, it’s a normal body reaction – it will pass
 This feels bad, and feelings are very often wrong
 These are just feelings, they will go away
 This won’t last forever
 Short-term pain for long-term gain
 I can feel bad and still choose to take a new and healthy direction
 I don’t need to rush, I can take things slowly
 I have survived before, I will survive now
 I feel this way because of my past experiences, but I am safe right now
 It’s okay to feel this way, it’s a normal reaction
 Right now, I am not in danger. Right now, I’m safe
 My mind is not always my friend
 Thoughts are just thoughts – they’re not necessarily true or factual
 This is difficult and uncomfortable, but it’s only temporary
 I can use my coping skills and get through this
 I can learn from this and it will be easier next time 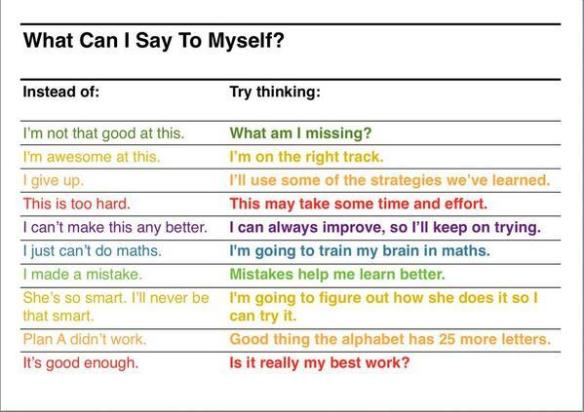 Help your learner see the positive by Reframing their Thoughts in a positive light.

My Coping Card to Beat Anxiety!
1. Anxiety is not dangerous. It can’t hurt me! It’s just a bully!
2. I can boss back my anxiety. I have done it before!
3. If my heart is racing, I get sweaty, and my tummy hurts. That means that my anxiety
is acting up. I’m not in danger.
4. I could do some relaxation now.

My Coping Card to Beat Anxiety!
1. My face is getting hot and my head is getting dizzy! My anxiety is acting up again!
2. Maybe I need to use the STOP plan now! *
3. If I’m feeling anxious, I could do some calm breathing to calm down.
4. I have lots of friends at school, and they like me even when I get anxious. They told
me so. 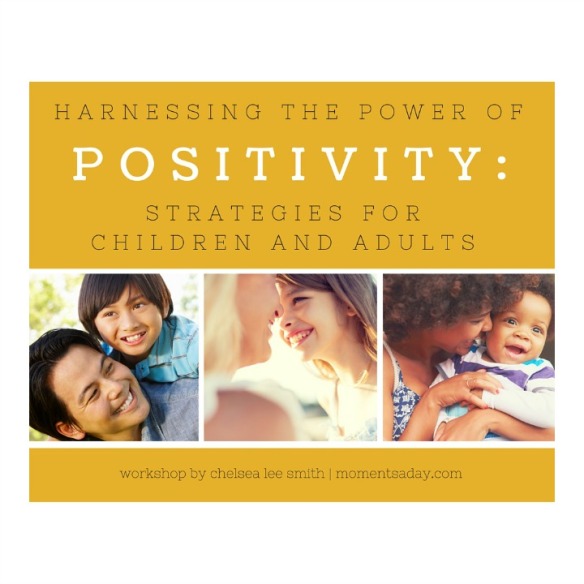 This is a printable workshop with a selection of activities, worksheets and craft ideas plus 30 exercises to help you develop a positive mindset.  To be used at home or in the classroom; for kids and/or adults. Cost 9.99

Motivating all students can be a challenge. This post focuses on the issues and strategies to help support those pupils who need us as teachers to meet them where they are at and help them find their way to motivation.

The Motivation Equation: Understanding a Child’s Lack of Effort by Kenneth Barish, Ph.D.

Classroom Applications of Cognitive Theories of Motivation By: Nona Tollefson

Motivation: The Key to Academic Success By: LD OnLine

How can parents help

Parents are central to student motivation. The beginning of a new school year is very important. Children with LD and ADHD often struggle with change. Parents can help get the year off to a good start.

Using Motivational Interviewing to Help Your Students by Lisa A. Sheldon

What the Research Says: Students who believe that they have the ability to complete a particular academic task (self-efficacy) do better and have higher levels of motivation (Jacobs et al., 2002). Yet students often sabotage their academic performance by engaging in negative self-talk about their abilities and by making faulty attributions to explain poor academic performance (Linnenbrink & Pintrich, 2002). Source

“Motivational Interviewing is a collaborative, goal-oriented style of communication with particular attention to the language of change. It is designed to strengthen personal motivation for and commitment to a specific goal by eliciting and exploring the person’s own reasons for change within an atmosphere of acceptance and compassion.” Miller and Rollnick (2012)

“When we think of failure; Failure will be ours.  If we remain undecided; Nothing will ever change.  All we need to do is want to achieve something great and then simply do it.  Never think of failure, for what we think, will come about.”    ~Maharishi Mahesh Yogi